Jamie is organising an event this weekend in Pitchers Wine Bar. The proceeds will go to his charity "Jamie's Journie" which provides support for children who have cancer and their families.  See Flyer.

On Wednesday 23rd September, to celebrate European Day of Languages, the French Department hosted a petit déjeuner à la française (French Breakfast) for all Year 8 pupils in the college canteen. Pupils got to savour an authentic French breakfast with a croissant, a pain au chocolat and a chocolat chaud (hot chocolate). A great way for our new Year 8 pupils to interact and get to know each other a little better!

Last week CultureTech took Lumen Christi College by storm for the second year running.
The Culture-Tech team ramped up the pupils’ enthusiasm by bringing interactive learning opportunities to the College. We had Minecraft, educational films; CREATE workshops and Kainos app development. Feedback from the events has been really positive and we are extremely pleased that Lumen Christi College has once again participated in this great week-long event in the City.

Minecraft is a game that has captured the imagination of kids the world over. The creative and building aspects of Minecraft enable players to build constructions out of textured cubes in a 3D procedurally generated world using coding. We have been in a privileged position this year where Culture-Tech have provided the licences for our Year 8 pupils to sample this software.

Year 12 Technology students were introduced to “Maker the Movie” a creative and inspiring film about the “Maker Movement” and “Techshop”. The films main theme explores the idea that we as a society have become too focused on consumerism and have forgotten how to make things. This film gave our Year 12 Technology students a lot to think about especially since they are on the cusp of designing and creating their own final products as part of their GCSE controlled assessment.
The afternoon film “Design and Thinking” was mainly directed at Year 11 Art and Design students.

The Year 13 Technology and Design class travelled to the Playhouse to take part in CREATE. CREATE is a unique event led by 6 young people from across Northern Ireland trying to get other young people enthused about the creative economy and the possibilities within it.

Kainos the IT Company who provide digital technology solutions that allow organisations and people to work smarter, faster and better visited the College to work with Year 13 IT and Software Systems Development students creating new apps.

Thanks to Mr Molloy Head of Design and Technology for organising and coordinating the events.

Your School Your Business

Year 8 pupils took part in an Employability workshop called “Your School Your Business” facilitated by Youth Enterprise NI on Friday 11th September. The Year 8 class councillors also participated in the event so as to act as a guide and friend to the younger pupils. Pupils got the opportunity to mix with their peers and develop new friendships whilst also exploring the school as a business of learning. Pupils assessed their skills and talents and throughout the course of the day pupils engaged in several interactive activities including People detective and group presentations. Pupils thoroughly enjoyed the experience and found that it greatly helped them settle into their new school surroundings.

Lumen Christi College Senior Prize Giving took place in the college on Tuesday 8th September.  The ceremony was attended by students, past and present, along with special guest Mr Gavin Killeen, members of the Board of Governors, parents, students and staff.  The event marked the many pastoral and academic achievements of students over the past year.  Congratulations to all! 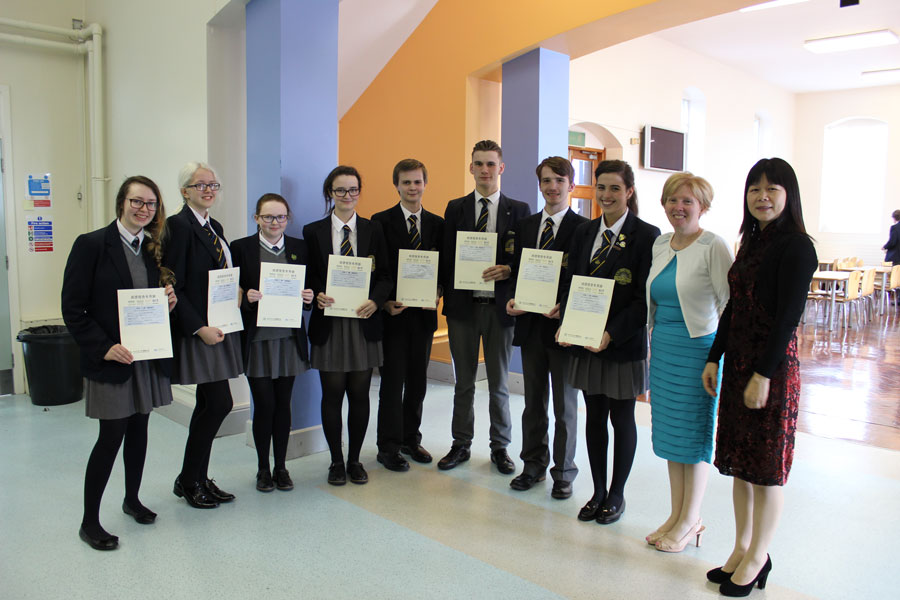 Students who were awarded the HSK Level 1 Certificate in Mandarin Chinese. Included in the photograph is Mrs Xu Linn (Tutor) and Dr Marie Ferris (Vice-Principal).

Congratulations to Fintan Stewart, Year 13, who was picked for the N Ireland squad to compete in the UK school games in the 1500m. The Games will take place in Manchester over the weekend. Fintan will enjoy 3 days as a professional athlete.

This is a surperb achievement and fantastic opportunity. Well done Fintan.